The history of the Cruelbaits

Well it all started with the idea of making a jerkbait that performs well all around in the Hungarian waters. The thing was i did not feel the jerks on sale to be optimal at that time for my fishing marks. They were either too big or too tied to the top so that it was impossible to make them dive a little or some of them were just a sinking rock. There were a few that was all right but they were boring at times. I shared the idea of making a jerk with a friend of mine who was making lures but he lost faith in the project after the initial spark. He haven't used jerking types of lures before that.Later our ways seperated but the will to make my idea happen was still there and once i decided it was time to do it. I am well situtated in the carpenter workshop to be able to make a jerk body, but i had no idea about it's weighting and the physics of its movement. It was time to sit down behind the computer desk and start up the technical drawing application and created the rough borderlines that i decided they are acceptable for what i wanted. Then i drew different shapes between those borderlines, finishing off 4-5 models. I put them into reality with handtools and powertools. Some results i liked some i didn't. I chose the best 3 to be weighted. But i did not have the slightest idea how am i gonna do that. I went through the lures physics and came up with some theories. Then i had a look at some other lures weighting and it turned out my ideas of physics working underwater were correct. From all these informations i created a unique weighting system and guess what! the jerk did roughly what i wanted right at the first attempt. After some finetuning a body shape was born. I painted it real simple but even that was a bit of a challenge to me as i had no experience in drawing and painting. I tested it without any lacquer or varnish. The first cast proved the finetuning of the weighting was successful. I told my fishing buddy to come closer and have a look at the movement of the lure as i really liked it.As soon as he got there we both witnessed a nice pike coming up for it from the deep and grabbed it! What a start! The attacker was 69cm (2.26ft). I was really proud of the product of my own hands giving a result. I was fishing with it for hours. I had actions from smaller pikes but they didnt get hooked. Then i switched to manufactured lures and they didn't get any attention at all!
Who knows if we were still talking right now if that first pike wouldn't have attacked the lure then... 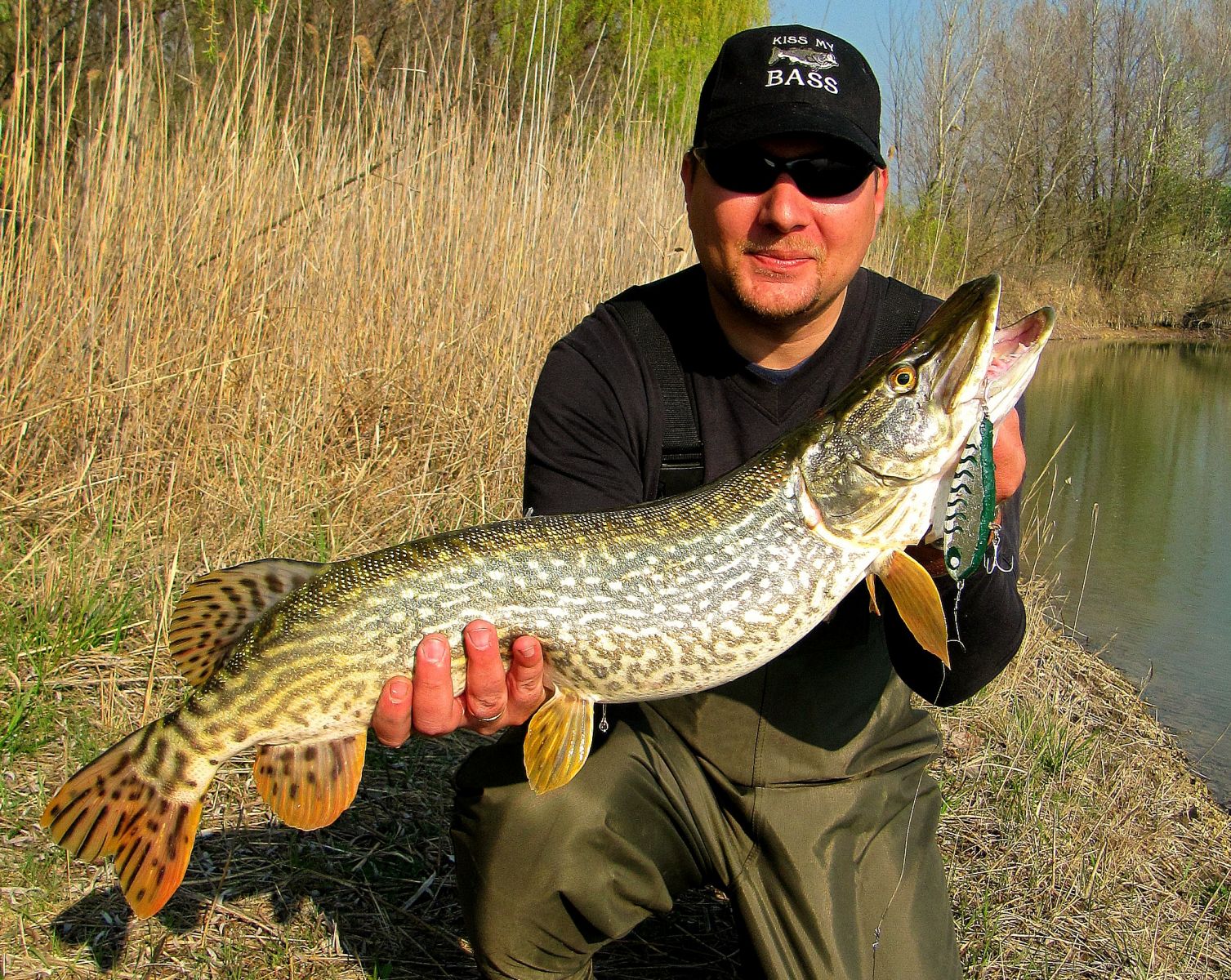 Then in the autumn it was followed by few more sessions: 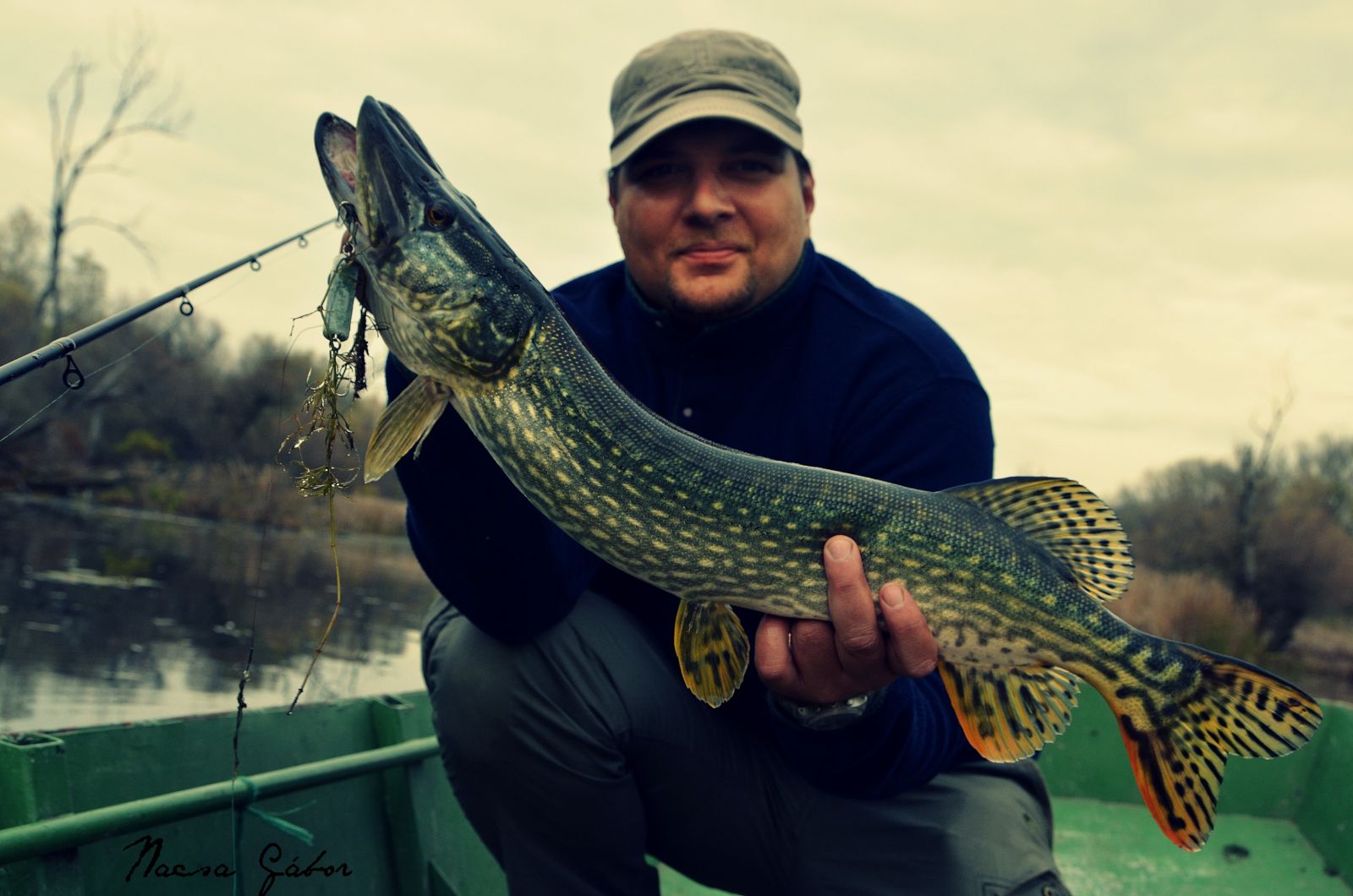 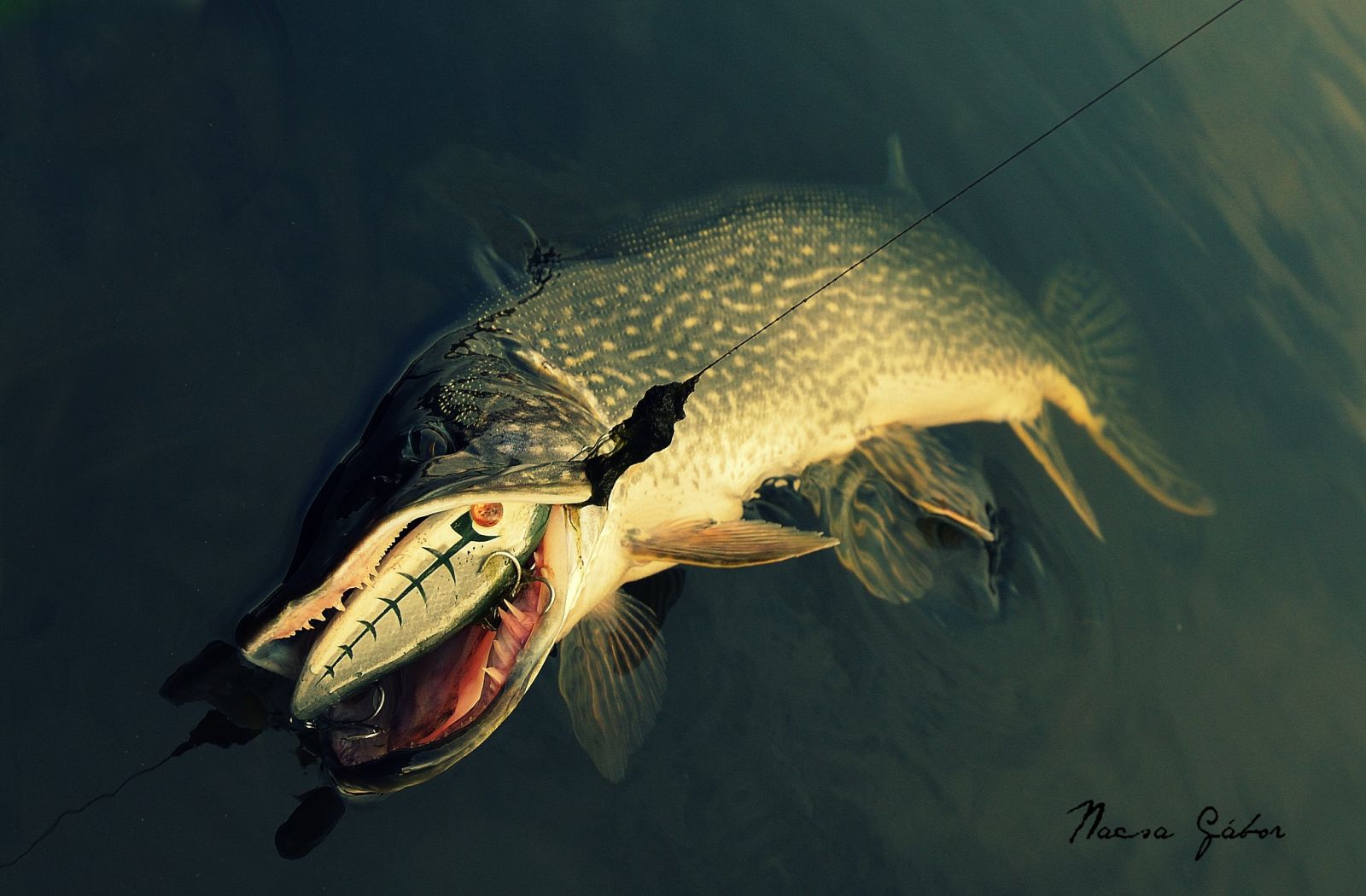 Getting really excited by these results i set a goal to myself: let's make a marketable quality product from the proven catchy lure. I invited Ákos Szente-Szabo into the project and he was interested.
Being an artist and a painter he also had been a lure fisherman for decades. I simply knew that i couldn't have found a better person for the job in the whole country.

We replanned the lure from the basics. It had to comply to more rules and there wasn't any room for compromises.
- The bodyshape has been changed a little.
- Therefore the weighting had to be changed too to match the original movement.
- We tested different woodtypes.
- The body's making has been partially taken up by machine so we could create identical shapes.
- The wiring length has been changed.
It continues to feature a through wire system.
- The wiring has been fixed differently, new material was added.
- New sizes and colours for the eyes have been tried and used.
- The eyes became drilled in the body to achive longer lasting quality.
- We tested and tried different paints and coatings.
- At the moment we use 3 different epoxy in different parts when making our lure.

Step-by-step we got to the result we wanted. Basically the lure's parts have been upgraded but the original movement remained. The biggest step was the coating, which we tried and experimented for months. This was the greatest challange for us as well as the materials and colours. We wanted to finish it before the pike season started but we couldn't. We only got to some prototypes which were tested on pikes later. There were some unsuccessful trials for innovation, some even took 4-5 attempts but eventually we got through...Most of the colour patterns went through a multiple-stage evolution before they reached their final appearance. Lots of behind-the-scenes photos were made that time.
These were meant for internal use only so apologies for the quality. 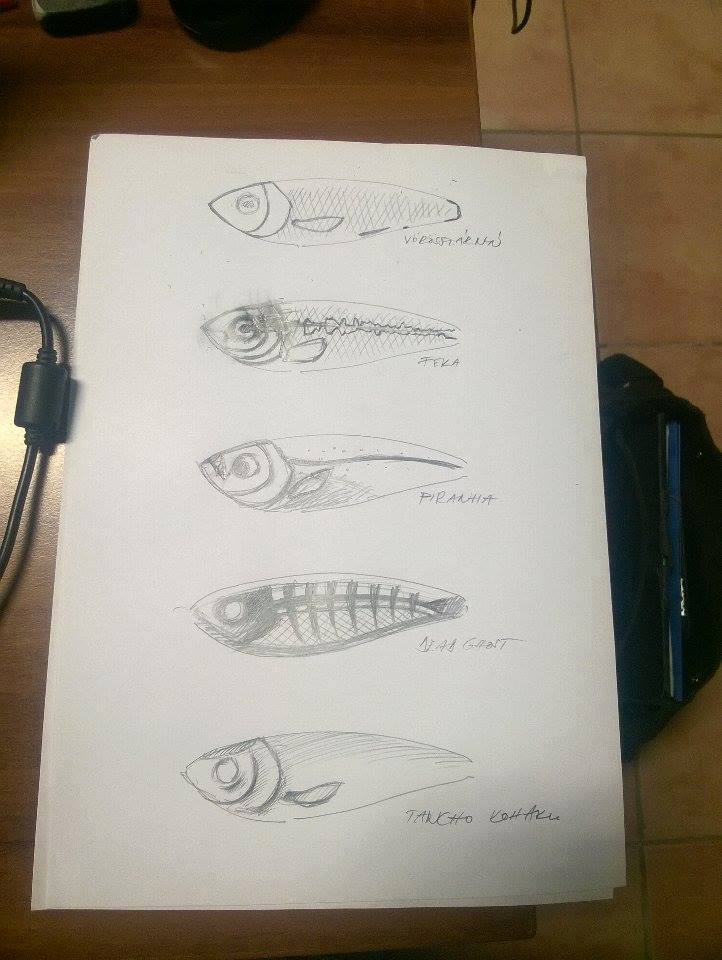 The plans of that time. Today they are all reality. 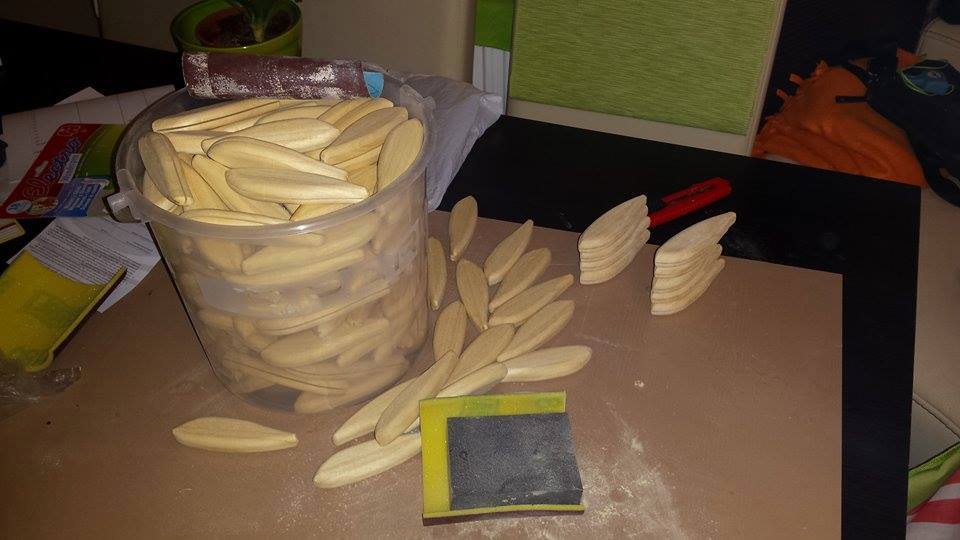 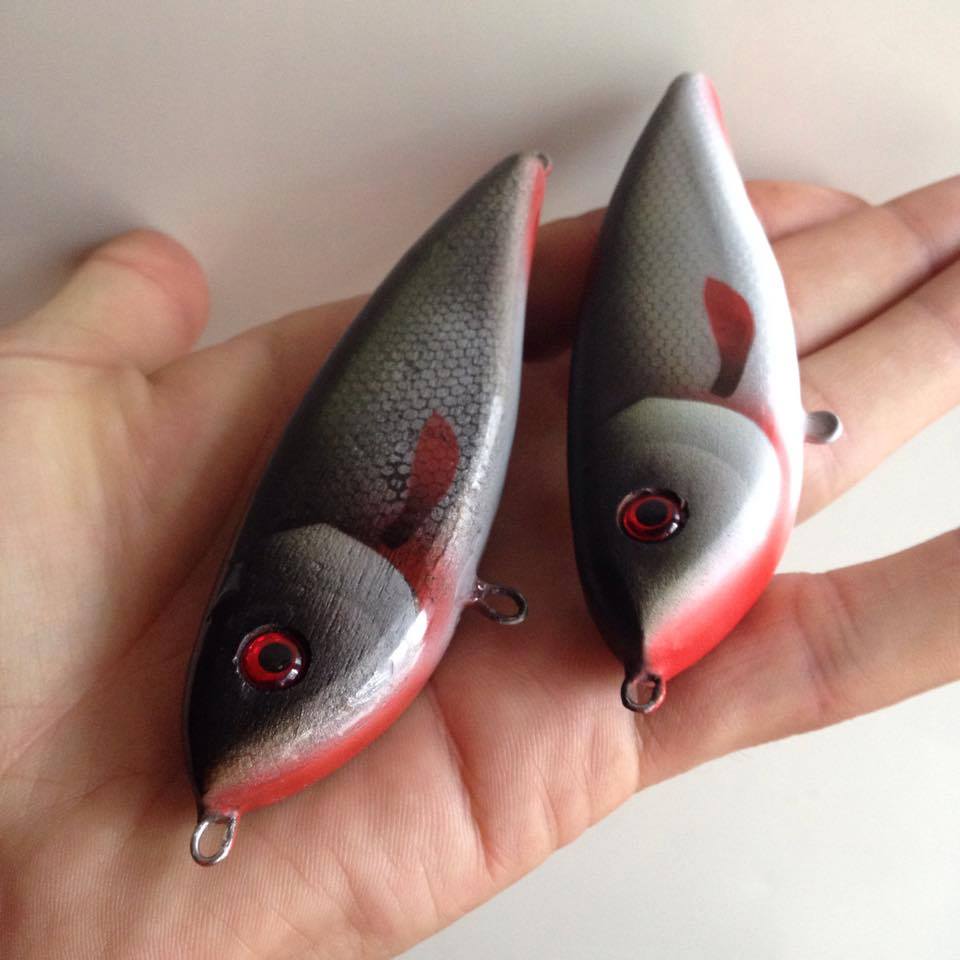 It took a really long testing and many variations to get the perfect coating materials and layersystem. The coating layer number went up to 8 and we still stick to that. In the meantime the sales have started for anglers and we received more and more positive feedbacks and catch reports. We launched the lures Facebook page so we can interactively communicate with our customers.After a few months it became clear that we are on the right path and the show must go on.

The history of Cruelbaits is continues to being written, but now it's happening right in front of the eyes of the fishing society. We receive catch reports and pictures on a weekly basis and now the Godfather Jerk made its name famous abroad in many countries all over Europe.Something we still find hard to believe!
It's not only us anymore, we have many friends who help us in smaller and bigger things and for what we are extremely grateful! Most of the time the great things consist of many-many smaller parts too. We would like to hereby thank you all the selfless help and positive energy that you had been giving us! Really means the world to us.
Gets us going through even the biggest problems.